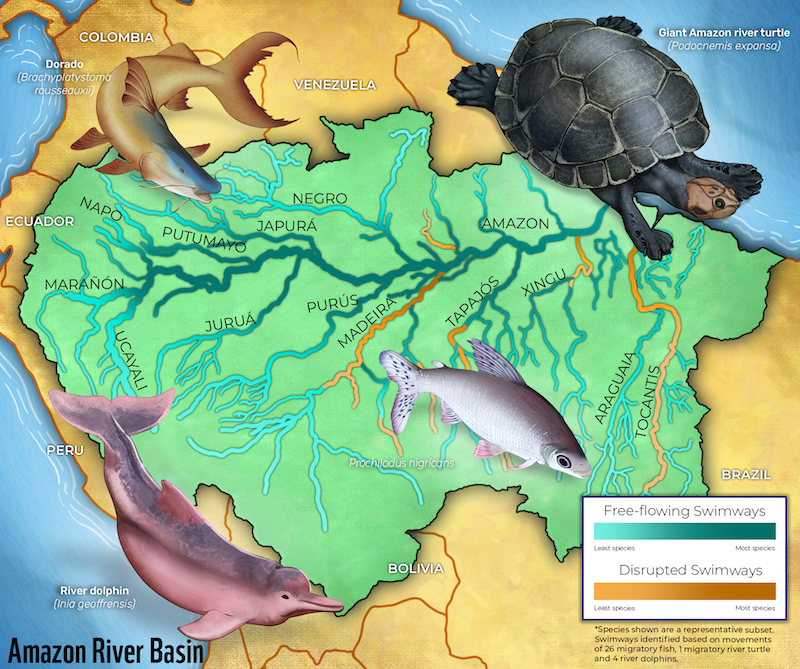 Map of free-flowing and disrupted swimways for key aquatic species in the Amazon basin, with illustrations of some of the specific species. Image credit: © Gustavo Carrasco / WWF-Peru

New research from WWF and Confluvio's Günther Grill has identified critical rivers at risk from future hydropower construction in the Amazon Basin.

The Amazon Basin contains 20% of the world’s liquid freshwater across a vast network of rivers. These rivers are migratory pathways for many fish, river turtles & dolphins. The rivers and forests of the Amazon contain an unparalleled wealth of biodiversity, with the freshwater fish in these rivers contributing to food security and economic and social benefits for those living in the region.

The Amazon River is the world’s longest free-flowing river, and the basin contains 16 other very long (>1000km) free-flowing rivers. However, these rivers face threats from deforestation, mining, climate change, and from hundreds of planned hydropower projects. These dams cause fragmentation in the river networks, affecting water quality, reducing sediment and nutrient transport, and disrupting the migratory pathways of freshwater species. Dams also disrupt lateral connectivity along river floodplains by altering the pattern of the flood pulse.

The researchers conducted a free-flowing river assessment following the methods of Grill et al. (2019) to identify the current and future status of river connectivity in the region. This comprehensive connectivity assessment considers four dimensions of fluvial connectivity: longitudinal (river channel), lateral (floodplains), vertical (groundwater and atmosphere), and temporal (intermittency). The global methodology was modified to produce the most accurate results for the Amazon basin based on benchmarking analysis and information from local and regional experts. Additionally, the most recent available data from literature and government sources was used to identify existing and future dams, barriers, and waterfalls.

The study identified 93 free-flowing freshwater connectivity corridors which are at least 500km in length. If all proposed dams are built, one-fifth of these rivers would lose their good connectivity and no longer act as FCCs. The rivers at risk of losing FCC status include some of the most significant and iconic rivers in the region: the Negro, Marañón, and Ucayali rivers, as well as the Amazon river itself. The impacts of this fragmentation would have resounding consequences for biodiversity, harming migratory fishes, turtles, and dolphins, and for many other species who rely on floodplains. The loss of freshwater fishes in particular would affect the communities in the Amazon who rely on fisheries for food security and livelihoods.

The results of this study demonstrate the importance of comprehensive basin-level planning to avoid negative impacts of poorly sited hydropower development. The researchers suggest that such planning should include exploration of alternative development pathways and should site necessary hydropower in the locations with the lowest impact on rivers and ecosystems. Strategic early environmental assessments which consider the cumulative impacts of infrastructure on FCCs as well as proactive policy mechanisms to safeguard critical freshwater can be used to prioritize and protect the most important rivers.